There was big news this month, generally under-reported in the secular media, about the nation’s two largest Scouting organizations. 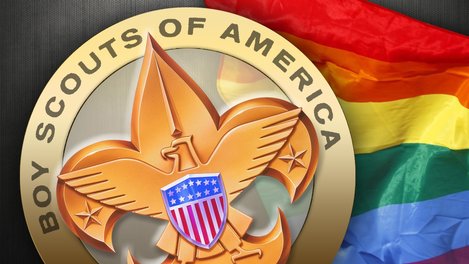 Robert Gates, president of the Boy Scouts of America, told a meeting of the National Organization last Thursday that the time has come to end the ban on homosexual adult leaders.  Gates cited the many cultural changes taking place under threat from homosexual activists, which occurred much faster than he expected.  Given anti-discrimination laws in several states, and same-sex marriage decisions where the courts had overthrown State Constitutional Amendments (such as has occurred in Alaska),  Gates stated  “The status quo in our movement’s membership standards cannot be sustained.”

Robert Gate’s background includes service as Secretary of Defense, where he has trod this path before, knuckling under to gay activists and repealing the “Don’t Ask – Don’t Tell” policy.  Since then, gay and lesbian “marriage” and associated publicly funded benefits have been forced on the military. Military Chaplains, consequently, have been vigorously prosecuted for offering a biblical opinion, even in private counseling situations.

Despite erroneous media reports, the BSA change is not yet in effect.  However, Gates is giving public notice that fundamental changes are coming.  To his credit, he made clear that he desires to “change our policy to allow charter partners – Unit Sponsoring Organizations – to determine the standards for their Scout leaders.  Such an approach would allow all churches, which sponsor some 70% of our Scout Units, to establish leadership standards consistent with their faith.  We must, at all costs, preserve the religious freedom of our church partners to do this.”

However, this approach is problematic for several reasons:  First; it throws the burden of legally defending traditional values upon the churches and Christ-centered non-profits which charter BSA Troops across the country.  Once activists target one or two out of the thousands of these churches in selected lawsuits, precedent will be set and deferral to faith-based Chartering Organizations will be at great risk.

In addition, this approach may put the churches themselves at risk beyond their affiliation with BSA:  The BSA is not a Christ centered program, so the church is at risk when it charters a BSA unit, and then claims a religious expression exemption as to why it won't accept gay leaders.

Overall, Gate’s announcement highlights the fact that a character-development organization can scarcely accomplish it’s mission if it lacks what C.S. Lewis called “an eternal reference point.”  For Christians, this is Scripture, and Scripture makes clear reference to what is appropriate, moral sexual behavior, and what is not.

Gate’s announcement comes as BSA membership plunged for a second year following the adoption of it’s most recent policy, which allows gay youth but not gay adult leaders.  Deeper analysis is even more troubling, in that Cub Scouts are suffering an even steeper decline in many Councils.

Of course, the truly "tolerant" approach would be to live and let live. Activists could establish another scouting organization to advance and promote leftist values, and leave the Boy Scouts alone.  However, just as homosexual activists have used raw governmental power to silence Christians in the military, they are now using all tools available to remake America’s bedrock institutions into their own image, and with the help of a complicit, leftist judiciary, silencing all dissent.

AFC encourages parents to be vigilant, and carefully monitor the upcoming proposal.  Those who care about our youth, and Scouting in particular, would do well to read the text of Robert Gates comments HERE to gain a full understanding of the issues.

And the Girl Scouts…

The previous week, Girl Scouts USA published it’s policy allowing the enrollment of transgendered youth:  "If the child is recognized by the family and school/community as a girl and lives culturally as a girl, then Girl Scouts is an organization that can serve her in a setting that is both emotionally and physically safe."

This means girls in the organization will be learn from an early age to recognize and accept transgenderism as a normal lifestyle.

Alaska Family Council urges parents to be familiar with the leaders and policies of any organization that they entrust to influence the character formation of their children.  We recall the words of our Savior “If anyone causes one of these little ones—those who believe in me—to stumble, it would be better for them to have a large millstone hung around their neck and to be drowned in the depths of the sea.”  Mark 9:42