Cardinal Dolan in Anchorage Next Week 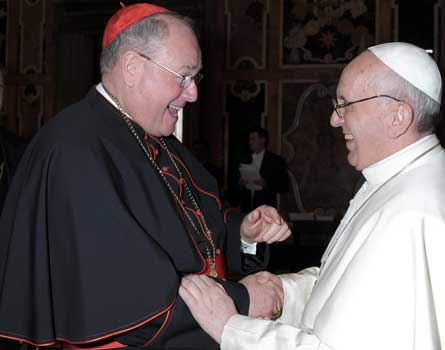 Cardinal Timothy Dolan of New York will be in Anchorage next week providing an opportunity for Catholics as well as Evangelicals and Orthodox believers to hear from what Time Magazine called one of the "100 Most Influential People in the World" for 2012 along with being a possible name for Pope in many circles after Pope Benedict XVI stepped down.

Cardinal Dolan was also among the 115 cardinals who gathered in Rome and ultimately selected Pope Francis as the new head of the Catholic Church last year.

As a former President of the United States Conference on Catholic Bishops, Cardinal Dolan has spoken very eloquently and passionately in support of Biblical marriage, the sanctity of life and religious liberty, particularly regarding the ObamaCare mandate which forced private employers to provide co-pay coverage for contraception and abortion causing drugs.

Alaska Family Action highly encourages pro-family Alaskans to attend one of the following public events that will surely be filled to capacity.

• Monday, March 24th, Cardinal Dolan’s talk titled, “3 Challenges facing Pope Francis and the Church,” will be held at Our Lady of Guadalupe Church in Anchorage. The free public event will take place from 7:30 to 8:45 p.m. and will include a Q&A session with the audience. A reception with the cardinal will immediately follow.

• Wednesday, March 26th, Cardinal Dolan will celebrate the 5:30 p.m. Mass and give the homily at Our Lady of Guadalupe Church. While the Mass is a public event, the Cardinal Dolan’s homily will be directed primarily to the priests of Alaska. Cardinal Dolan is in Alaska for the annual statewide priest convocation and his comments will relate to the reflections provided to the priests over the preceding two days of the convocation.