Duck Dynasty and the Bigger Picture 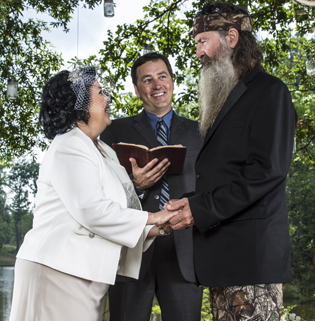 Phil Robertson, the ZZ Top-like, overtly Christian clan leader of the phenomenally popular television series, Duck Dynasty, has been canned. Shot down for making statements about homosexuality in a GQ Magazine interview judged by A&E, the conglomerate that oversees the show, as "disappointing" and "not reflective of the series."

In the interview, Robertson does a fair off-the-cuff rendition of 1 Corinthians 6:9-10 that says "Or do you not know that the unrighteous will not inherit the kingdom of God? Do not be deceived: neither the sexually immoral, nor idolaters, nor adulterers, nor men who practice homosexuality, nor thieves, nor the greedy, nor drunkards, nor revilers, nor swindlers will inherit the kingdom of God."

He also takes the liberty to graphically point out why men should be attracted to women rather than other men. It's lewd but to the point.

Hundreds of thousands of people across the Duck Nation are signing on-line petitions asking for his return. On the other side, the Human Rights Commission says that to suggest that same-sex attraction is anything but normal is "dangerous." A spokesperson for a prominent gay and lesbian activist organization said that the country is changing and that Robertson needs to "get in line."

OK, let's all grab a big, tall glass of sweet tea and breathe out for a moment.

It's hard to imagine that anyone at A&E was even slightly surprised by Robertson's statement regarding sexuality. We're talking about a Bible believing, Southern religious family that cooked up squirrels and never showed the slightest inclination toward political correctness. Network executives weren't holding out hope that Uncle Si or Willie were ever going to don rainbow camouflage in future episodes.

Click HERE to read the rest of the article on-line.

Just five days remaining in 2013.  Click HERE to see what we have planned for 2014 and Why You Should Give. Please know how important and appreciated your support is.  Help us move into 2014 with stability and confidence as we seek to transform the culture right here in Alaska.