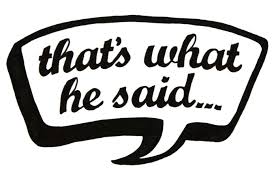 Dr. Jerry Prevo, Amy Demboski and now Bernadette Wilson have been thrown under the bus for a comment that has now been verified to have been made by Ethan Berkowitz.

The bottom line is that Ethan Berkowitz chose to malign others for something he himself said.

If he wanted to clarify his intentions, he could have and should have done so.  Instead, he chose not to and in fact had many people thinking he never actually said it.  He wouldn't "dignify" the question. People were below him for even insinuating that he said such a thing.

Own it Ethan. Defend yourself. Voters deserve that.