It exposes the homosexual lobby — in its own words — for its intent to lie and mislead in order to destroy the institution of marriage. But the video also documents frightening events that are becoming more and more mainstream as state and local governments and courts recognize them as normal. Just to name a few: ”gender bender days” at schools; parents winning permission to administer hormone blockers to their boy until a certain age so he could decide what sex he wanted t be; polygamy; and multiple homosexual “couples” gaining recognition as parents. Read about another outrageous example, here

Marriage is the lifelong union of a husband and wife. It is timeless, universal, and unique, and benefits society – especially children – in ways no other relationship can. That’s why marriage policy is rooted in the reality that children need a mother and a father. While not every husband and wife will have children, every child still has, needs, and deserves a mom and a dad. So in essence, the government has an interest in the institution of marriage because marriage is a personal promise with a public purpose.

Put yet another way, if marriage isn’t for procreation then the sex act simply is for pleasure which means anyone can engage in it in any manner he or she chooses, which renders marriage meaningless. ADF continues:

Redefining marriage to include same-sex couples is not the only threat weakening the institution. It is, however, the most prominent and pressing danger to fundamentally altering marriage, as it undermines the good that marriage provides society. Moreover, redefining marriage is at odds with religious freedom, as we see more and more that those who believe in marriage are politically, culturally, and legally persecuted for those beliefs. Countless people — from small business owners to Catholic hospitals, school counselors, professors, and students, to chaplains and churches – who will not promote or condone the redefinition of marriage are already under serious legal assault for their faith.

Nothing exposes the hypocrisy of the Secular Left more than this. In its shrill claims of the “right” of homosexual marriage it has no care about obliterating the First Amendment even though no such “right” to marriage is in the constitution. In fact, marriage isn’t a “right” at all. It’s a privilege, perfectly acceptable for government to regulate as the video explains. 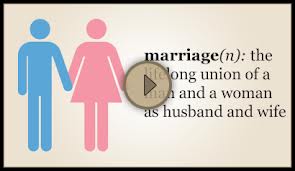 Help educate the public. Share this video so more can understand what the