Murkowski Needs to Hear From YOU Now ! 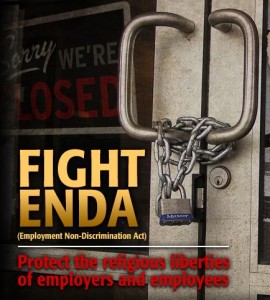 As early as this upcoming Monday, Nov. 4, the U.S. Senate is expected to vote on the deceitfully named “Employment Non-Discrimination Act” also known as ENDA. Backed by the American Civil Liberties Union (ACLU) and Human Rights Campaign (HRC), this type of legislation has proven to cause discrimination, not deter it.

The bill, S. 815, is similar to Proposition 5 - an ordinance Alaska Family Action successfully defeated back in 2010 that would have created special privileges based on the subjective standards of sexual orientation and gender identity. ENDA would make it illegal for organizations with 15 or more employees to "fail or refuse to hire or to discharge any individual, or otherwise discriminate against any individual ... because of such individual's actual or perceived sexual orientation or gender identity." The purported exemptions for faith-based organizations do not protect First Amendment freedoms.

Our friends at the Family Research Council have established a website specifically to fight ENDA. Click HERE to learn more.

The infamous Elane Photography case out of New Mexico was a direct result of policies similar to ENDA. As you may know, Elane Photography was fined almost $7,000 for declining to take photographs at a same-sex commitment ceremony because she held a biblical view of sexuality and marriage.

Ryan Anderson of the Heritage Foundation clearly explains why people from all walks of life should oppose S. 815:

Of course, employers should respect the intrinsic dignity of all their employees. But ENDA is bad public policy. Its threats to our freedoms unite civil libertarians concerned about free speech and religious liberty, free marketers concerned about freedom of contract and government interference in the marketplace, and social conservatives concerned about marriage and culture: 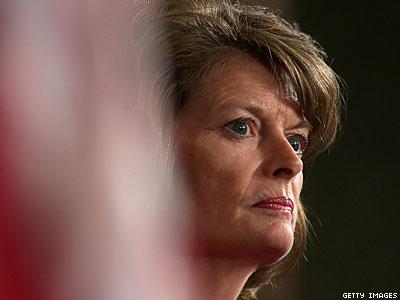 Alaska Senator Lisa Murkowski unfortunately has been reliably one of the most liberal Republican U.S. Senators and has been specifically courted by the gay-activist community to support ENDA since she came out in support of same-sex marriage. She has credited the Human Rights Campaign, a gay-rights political group, for convincing her to vote in support of this unnecessary and harmful legislation.

Murkowski needs to hear from you right away with a respectful request to vote NO on ENDA!