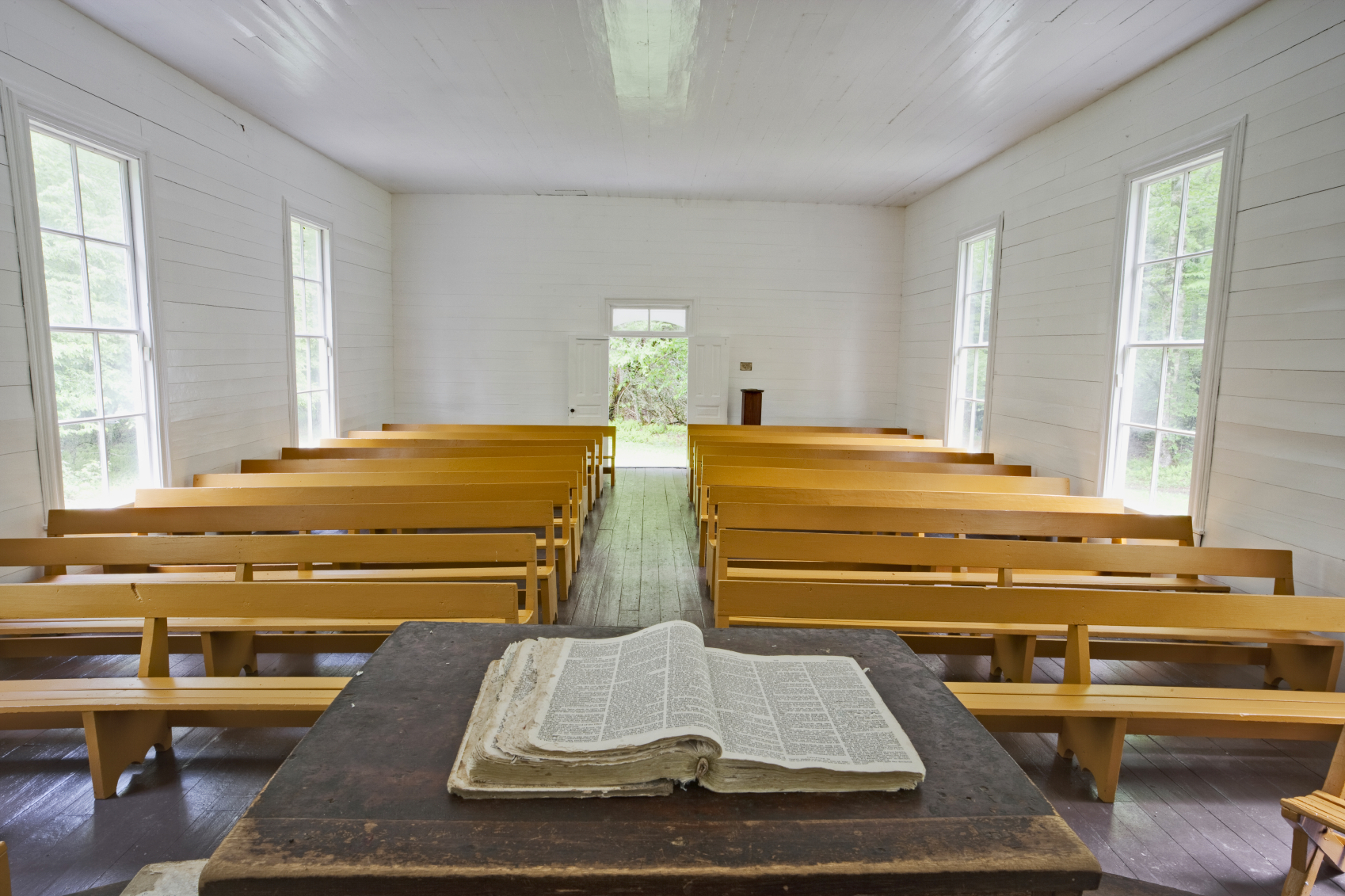 As we witness the decline of America reason itself demands we ask, ‘How did our nation come to this?’

How did America, as a Christian nation, come to where it expels God and his commandments from the classroom, but then wonders why its children bring guns to those same classrooms?

How did America, as a Christian nation, allow itself to be redefined as openly hostile to Christianity by atheists, homosexual activists, Muslims and self-described intellectuals?

…where a young school boy who calls his teacher ‘cute’ can be expelled for sexual harassment, but in that same school that same boy can be taught that homosexuality is perfectly normal behavior?

…where an atheist presumes to tell the rest of us that which is either right or wrong, when he has nothing but his opinion to base that differentiation on?

…where a man would vigorously argue for a law which forces medical professionals to leave a child, born alive after a failed abortion, to die cold and alone in a dark corner of a clinic; and where that same man, obviously possessed of a profoundly seared conscience, would then be chosen by Americans to be their President?

… where the Supreme Court, while sitting under an engraving of the Ten Commandments, decides that lower courts cannot display those same commandments?

How did America, the economic engine of the world, allow its children to rank only 17th in science and 24th in math, even while drugs and teenage pregnancy ravage those same children?

How did America, the victor of two world wars and the undisputed military leader of the world allow itself to find any common cause with a worldview which relegates its women to the legal status of property and celebrates when its children die as suicide bombers ...just as it coerces a historical, cultural and religious ally to sacrifice its land for a peace that will never come?

These questions have come to describe a once great nation… our nation.  My purpose in asking these questions is to challenge those, who by their calling, are compelled to answer them and who, by that same calling, bear a great deal of the responsibility for that decline.

There was a time in America when those who were called to stand in the pulpit also stood in the public square, as they understood that God saw no difference between the two.  They understood that the Author of the Gospel made no distinction between the climate-controlled side of the church door and the community beyond it.  That same Author compelled them to understand the very clear relationship between the lack of virtue in the community and the problems facing the Church.  They courageously and commonly followed Jesus’ example in Matthew Chapter 23 when He publicly criticized the political and religious leaders of that day as hypocrites six times, blind guides twice, wicked, children of hell and a brood of vipers… and then condemned them to hell. Today, the silence from the pulpit is deafening when our president compels our military to accept homosexuality in the foxhole, even as he throws the bible out of it.

There was a time in America that when a politician of questionable morals ran for office Christian leaders not only sermonized against him from the pulpit, they would then publish that same sermon in the local newspaper, often causing that aspiring politician to crawl back into well deserved obscurity.  Today, the Church won't even consider excommunicating a politician who stridently advocates for the public funding of the butchery we know as partial birth abortion.

In just one generation, we’ve come to believe that we as Christians have no right even to define that which is moral, let alone find a pastor with the courage to criticize a reprobate politician or clergyman.

And in the pulpit itself, while we have no shortage of pastors who have the audacity to ‘marry’ two homosexuals, we have precious few others who will stand, either publicly or privately, to condemn them for doing so.  Likewise, when a pastor is caught abusing a child or a woman, his church leadership tends to shelter him before they protect his victims… all in the name of ‘saving the ministry.’

Nearly two centuries ago a Frenchman named Alexis de Tocqueville traveled the length and breadth of America in an attempt to discover that which made it so great. He concluded simply that, “America is great because she is good.”  But now, it is clear that America is failing because she is simply no longer good.  And she is no longer good because those whose duty it is to teach her people to be good, have become more concerned with filling their pews with those who would fill their offering plates than they are with teaching what, and how, Jesus did.  So while they excel in the teaching that we are to love one another, they fail to even mention the biblical imperatives to fear God and avoid sin.

I’ve heard evangelical pastors comment that they won’t speak against abortion because they don’t want to offend someone who may have had one.  I’ve heard them say they won’t speak against homosexuality because they believe it more important to love the sinner than it is to speak the Truth, conveniently forgetting that Jesus was brutally killed for speaking that same Truth.  Indeed, some have fallen so far from truth and grace they reason that homosexuality between two loving and committed adults is not sin but in fact a good thing, and therefore elect to perform same-sex marriages, even while their church leadership looks on approvingly.

So when our children kill each other or have children themselves; when our young men and boys pride themselves in fathering children out of wedlock: when our society celebrates violence and perverse sexuality as entertainment; when our politicians believe more debt will reduce debt, leaving our once great nation servile to another nation which itself has butchered 350 million of its own children; when we see all this and then look for a place to lay blame… we need look no further than the pulpit.

You see, corrupt politicians and bureaucrats are not to blame for America’s moral, cultural and financial decline.  Neither are failed schools or a legal system which serves justice miserably.  America’s downfall was not heralded by court decisions such as Roe v. Wade, or Lawrence v. Texas, but by the simple failure to preach the whole Gospel from the pulpit and in the public square.

While failed schools, injustice, teen pregnancy and national indebtedness are very real problems, they are merely the natural outworking of a people who have rejected the very notion of their own Creator.  These are a people who have not been taught that it is sin which separates them from their Creator while binding them to their misery.  Indeed, some have even been taught there is no such thing as sin, compelling them to learn the hard way that the most perilous of Man’s endeavors is that of denying his Creator.

As I look to the future and see America’s downfall as a failure of the pulpit, so too do I see its redemption coming from that same pulpit.  When our Christian leaders come to the understanding that the whole Bible is the inerrant word of God and teach accordingly, and when they reassert themselves into the public dialog that is our political discourse these days our once great nation will find itself at the dawn of a new era of greatness, a greatness born of a goodness that can come only from the author of goodness Himself.

So if you are one of those rare pastors who has the conviction to stand for the whole Gospel, not only in your pulpit but in the public square as well, I commend you.  The future of your flock and your country rests squarely on your shoulders.  We all owe you a great deal of gratitude and respect.  The redemption that America sorely needs can come only from what you teach.

But if you are one who believes that politics is best left to politicians, that issues like gay marriage and abortion will somehow work themselves out without divine influence and pastoral leadership, if you are either unwilling or unable to recognize sin and then speak against it,  if you can somehow reason that a politician who argues for infanticide is not only a good man but a good President, I ask that you get down on your knees and pray for the forgiveness and  guidance that comes only from your Creator and his Scripture.

As I speak these words to you I am disheartened, because if I, as a layman, must convince you that you are compelled to speak both of the love of Christ and the fear of God, you have either not been taught well yourselves or you have allowed yourselves to blinded to the whole teaching of God’s Word, either of which disqualifies you from standing in the pulpit.

One day each of us will be held by our Creator to account for both what we did here on his Earth, and what we did not.  I believe that as pastors, as spiritual teachers, you will be held to the highest standard.

As I pose these questions it becomes self-evident that one can stand on but one side of these, and other issues and still be right with one’s Creator.

I pity the pastor who is unable to answer Him by saying, “God, I stood, I spoke and I fought for your Truth.  I did so in the church you gave me, I did so in the community you allowed me to live in and I did so in the nation you created and blessed me and my family with.”  I pity that man and pray for God’s mercy on him.

In conclusion, if I have offended some by speaking as I have I challenge them to say where I have misspoken.  But keep in mind I am not the first to stand before the clergy to commend them to speak the whole truth of scripture. In his devotional, “My Utmost for His Highest”, Oswald Chambers addresses this very issue when he said;

My purpose in speaking here is to merely communicate the truth, not to offend or appease.

If I have encouraged you in your endeavors to speak "the Word of God in its undiluted sternness" then I have accomplished that which I intended.  If I have failed, it is not because I have not spoken the truth, but that you have chosen to ignore it.

May God bless you and your ministry with the courage to stand firm for His Word!