In a remarkably arrogant move, the Court has placed another Judge with a serious conflict of interest on the latest Planned Parenthood lawsuit against the State regarding the "medically necessary" abortion regulations implemented recently.

As you know if you've been following this with us, the initial Judge assigned to the case, Judge Mark Rindner was identified as having multiple conflicts of interest including working for the ACLU, one of the plaintiffs in the case.  In addition, Judge Rindner's wife, Christine Schleuss, was hired by Planned Parenthood, the other plaintiff in the case, to sue the state of Alaska back in 1998 over THE VERY SAME ISSUE that is involved in this recent lawsuit: Medicaid funding of abortion.

The State of Alaska, the defendant in this case, successfully asked Judge Rindner to be removed from this case. That's the good news.  He was then replaced today by Judge Gregory Miller who seemingly had no conflict but then, Judge Miller recused himself from the case and the Court, inexplicably, replaced Miller with Judge John Suddock.

Judge Suddock just happens to be the former lawfirm partner of the very same Christine Schleuss who was hired by Planned Parenthood in the original Medicaid funding of abortion case.

If you are dizzy with the kind of nepotism and mind-numbing games that are being played by our third branch of Government...join the gang.

So, we are AGAIN asking ALL OF YOU and even those of you who haven't yet, to engage again based on the very simple fact that Judge John Suddock has a serious conflict of interest with his former law firm partner, Christine Schleuss, being counsel on this same matter previously. 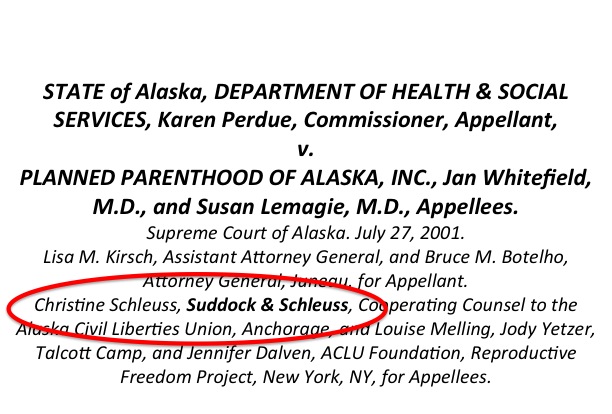 These activist judges need to know that the law is above this kind of manipulation and ethical violations.

Again, here are the people to contact NOW. One more time, we're asking you to make sure justice is served. It's late in the day but your voice matters and makes a difference.