Let Legislators Know Where You Stand

In politics it is often said that some people don't see the light until they feel the heat.  In other words, as citizens engage and clearly communicate to their elected officials about an issue, the tide can turn.  Right now is when we need that to happen.

Today at 1:00pm, if you are able, please call in and testify in support of HB173 - the House bill that clarifies what a "medically necessary" abortion is in order for it to be covered by Medicaid - a federal/state cooperative health care program for needy people.

The number to call is 855-463-5009.  Testimony is limited to 2 minutes per person. Here are a few talking points you might want to consider.

To put things into perspective, through the language of images, we offer the following - please share far and wide. The Rights of Children Trump the Rights To Children

“Denying children parents of both genders is an objective evil. Kids need and yearn for both.” Probably not a statement most people would attribute to a "progressive". Actually, it was spoken by Douglas Manwaring, a co-founder of the National Capital Tea Party Patriots who also happens to be openly gay.  As a father of two adopted sons, he once divorced his wife to pursue his homosexual desires and has since moved back in with his ex-wife to raise his kids after discovering over the course of a decade that “creating a family with another man is not completely equal to creating a family with a woman.”

Although Manwaring is a staunch believer in civil unions, he doesn’t mince words regarding marriage stating that “Genderless marriage is not marriage at all. It is something else entirely. Marriage is not an elastic term. It is immutable. It offers the very best for children and society.” Again, this is from an openly gay man who has decided the rights of children trump the emotional needs of adults. Click HERE for the article on Manwaring.

In Paris last week, nearly half a million French marched against proposed legislation that would legalize same-sex marriage in the country we liberated on the beaches of Normandy.  Joining the pro-family conservatives were homosexual activists of a different stripe like Jean-Marc, a French mayor who claimed “The rights of children trump the right to children.” In a country that defines having a laissez faire attitude toward all things sexual, something is surfacing in their own LGBTQ community as gay marriage takes center stage.

Xavier Bongibault, an atheist homosexual, is another prominent spokesman against the bill. “In France, marriage is not designed to protect the love between two people. French marriage is specifically designed to provide children with families,” he said in an interview. “[T]he most serious study done so far...demonstrates quite clearly that a child has trouble being raised by gay parents.” Can you say Vive la France ? Click here for more.

As the U.S. Supreme Court hears oral arguments in cases that challenge the constitutionality of the federal Defense of Marriage Act (DOMA) and California’s Proposition 8, its time to get up to speed on this defining issue. In no uncertain terms, this is the Roe v. Wade regarding marriage in our country.

Ultimately, we cannot forget or overlook that Government recognizes marriage because it benefits society in a way that no other relationship does.  Moms and dads are both necessary for the optimal setting to raise a child and neither is replaceable by a generic “adult.” Marriage is society’s least restrictive means to ensure the well-being of children, while respecting everyone’s freedom to form their own relationships.  It is based on the biological fact that reproduction depends on a man and a woman and the reality that children need a mother and a father. It predates government and is the fundamental building block of all human civilization.

The Supreme Court should resist demands to prematurely end the national debate over the future of marriage. The Court should not attempt to silence the debate, but should let it go on. The Court should respect the freedom of citizens to affirm the bedrock social institution that diverse cultures and faiths have honored throughout the history of Western Civilization.

Those who want to redefine marriage to include same-sex couples are excluding the norm of sexual complementarity. As they do that, other norms like monogamy, sexual exclusivity and permanency become optional as well.  Is this really what we want as a culture for generations to come?

As Alaskans, we need to remember that we were the first state in the country to define marriage as a union between one man and one woman in our State Constitution.  If the high Court rules against DOMA, that amendment is deemed meaningless. That 1998 amendment, by the way, has not prevented one gay or lesbian couple from forming a meaningful relationship.  Advocates for redefining marriage should not be allowed to do an end run on the democratic process to accomplish their political objectives. Back in France, 66 year-old Jean-Dominique Bunel, a specialist in humanitarian law who has done relief work in war-torn areas, told a local newspaper he “was raised by two women” and that he  “suffered from the lack of a father, a daily presence, a character and a properly masculine example, some counterweight to the relationship of my mother to her lover. I was aware of it at a very early age. I lived that absence of a father, experienced it, as an amputation."

As our nation’s highest Court deliberates over the next two days and into their predicted decision sometime in June, may they realize that activists shouldn’t be allowed to convert marriage from an institution centered on the needs of children to an institution focused on the desires of adults.

Boy Scouts of America needs to hear from its members

The Boy Scouts of America will decide whether to change it’s longstanding prohibition against allowing self-avowed homosexuals as leaders in May but it's conducting a survey NOW of registered members, and wants to hear from you. How do I participate?  Some Scout Leaders and parents have received an email invitation to participate in a National Survey, but we understand that many have not.  If you are a Scout, registered leader, or parent of a Scout, BSA’s Great Alaska Council has made it simple.

As indicated on the website, parents should use your child’s ID and indicate you are a parent and input your own demographic information.

Will my voice be heard?  Absolutely!  Families who want to preserve the traditional character of Scouting, including the opportunity for faith-based groups to partner with BSA as a platform for building Christian character in their young men, NEED TO STAND UP FOR YOUR SONS NOW.

VOICES MAKE A DIFFERENCE - On January 29th, the General Council on United Methodist Men “welcomed news that the Boy Scouts of America is considering ending its decades-long ban on gay scouts and scout leaders.”  But, after hearing directly from their members in unprecedented numbers, the United Methodist Men turned 180 degrees and now are opposing the change in policy.  Click HERE to see their letter.  Of course, many other denominations stood firmly on Scriptural values from the outset.

Non-religious groups have weighed in as well providing well-documented evidence to BSA on how role models might have an impact on young men as well as the harmful impacts of the homosexual lifestyle. Click HERE for the letter sent to BSA by Family Watch International.

Most importantly, we also ask that you pray for wisdom and courage for the executives and leaders within the Scouting movement.  This has been a time of immense stress on them and their families as the LGBTQA lobby and now certain corporate donors are applying incredible pressure to normalize homosexual behavior.  We are confident the next step will be to take “reverent” from the Scout Law as many of these same corporate donors also prohibit donations to religious organizations.

This struggle really isn’t about having a place for homosexuals or atheists to benefit from Scouting. There are scouting alternatives to serve people who have these practices and beliefs.  This is about normalizing homosexual behavior by fundamentally changing a cultural icon.  For many of our young sons, this means Scouting - a valuable platform for growth into virtuous men of character and faith - will no longer be available.

The time to act is now.  Again, if you are a member of the Scouts, please click HERE 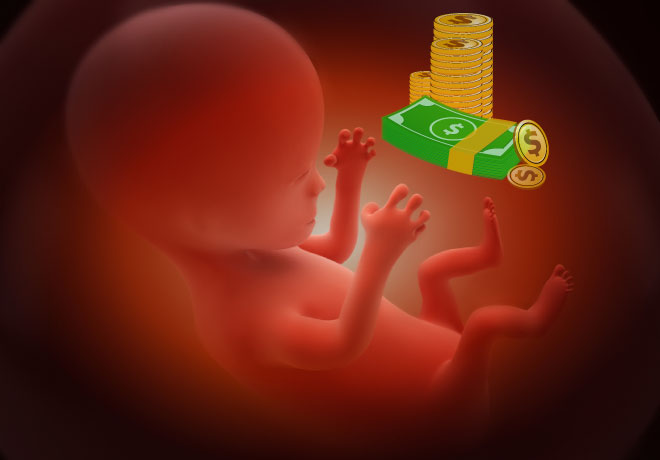 The fight is raging in the Alaska legislature to stop medicaid paying for abortions! We have compiled several resources for you on the facts behind this terrible mis-use of public funds:

2. AFA President Jim Minnery's article on the game that Planned Parenthood has been playing with your money

To track this bill on the Alaska State Legislature website, visit the SB 49 Status page. 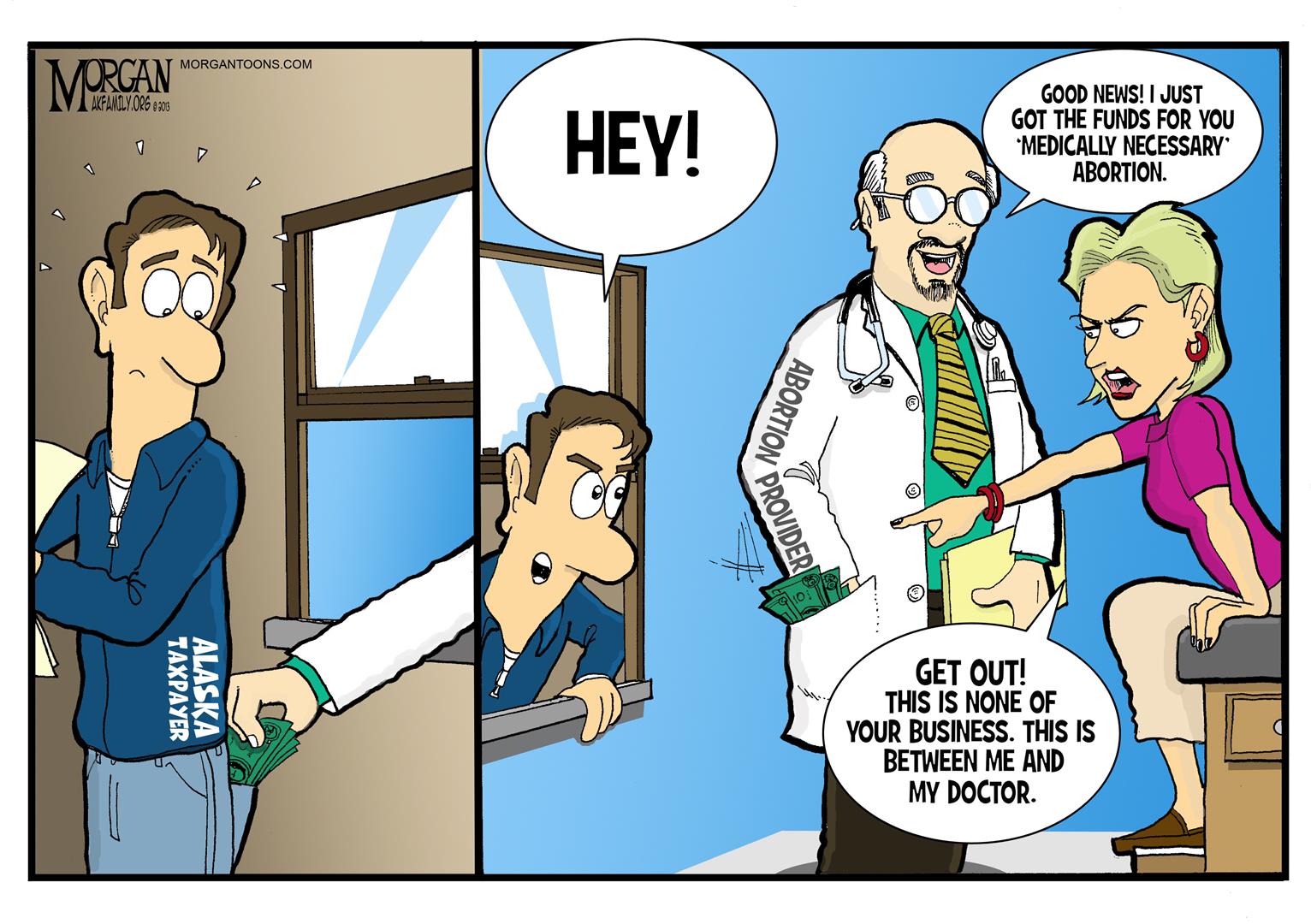 Are taxpayers in Alaska required to pay for all abortions under our Medicaid program? This Wednesday, February 27th at 1:30pm, a hearing will take place in Juneau that should shed some much needed light on what has become a heated topic of interest. Members of the Senate Judiciary Committee will take testimony from three individuals who have national prominence in their respective fields.

Our friends at Alliance Defending Freedom have a new cartoon on marriage: Our friends at ADF have a good cartoon commemorating the 40th anniversary of Roe vs Wade: The 2012 election has been so overshadowed by Presidential debates and State Senator commercials, it sometimes seems there is little oxygen left in the room for key local issues.  Nevertheless, judicial races are of critical importance:  Judges can, and do, overturn laws that are debated and enacted by our elected representatives.  Members of the public often express dismay at the lack of information available about individual candidates, particularly judges.  This election, Alaska Family Action has identified the record of one judge up for retention whose rulings we find particularly egregious, and asked voters to “Vote No on Sen Tan.”  The response to our legitimate concerns have come from a surprising source – media buys by the Alaska Judicial Council, funded by the State of Alaska itself.

Alaska Family Action has communicated objections with the Alaska Public Offices Commission, requesting an immediate halt to the use of public funds by the Alaska Judicial Council in its campaign to retain Judge Sen Tan.

Download a PDF of the complete article by clicking here, or read it below:

Pardon us for noticing, but it is dreadfully wrong – on its face – for the Alaska Judicial Council, a constitutionally mandated, state-funded, quasi-state agency, to be using public funds to campaign for retention of Superior Court Judge Sen K. Tan in Tuesdayʼs election.

Tan, because of what is seen by many as leftist judicial activism, is under attack by Alaska Family Action, a socially conservative group.